Enlargement of the EU: German and Dutch pupils discuss with each other

From 14th until 16th October 2013 pupils from Lüdinghausen/Germany and Zwolle/the Netherlands took over roles of European protagonists in the framework of our simulation game "Fokus Balkan". They were discussing if Kosovo, Macedonia, Serbia and Turkey should soon be welcomed as new member states of the EU. The participants of the Richard-von-Weizsäcker-Berufskolleg in Lüdinghausen and the Deltion College in Zwolle were arguing three days intensively about the pros and cons of enlargement. At the end, they opened the "gates" of the EU for three of the four countries. Previously, critical talks took place with the applicant countries in the Council, the Parliament and in the Commission in order to decide first of all on the candidate status. While Turkey could not fulfill the Copenhagen Criteria and thus did not reach the status, Kosovo, Macedonia and Serbia could successfully complete the accession negotiations. Subsequent to the scenario game, a comparison with reality took place, participants could discuss current questions concerning the enlargement process and reflected on the scenario game. 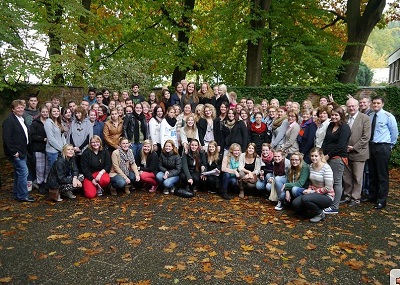