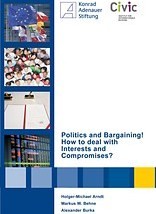 Citizens experience politics at local level, in a municipality or at regional level often as a discussion about the use of public places. The interests for the use of this public place are often very different. The effects of a new land allocation will affect everybody, especially when the central square of the city centre is in question.

The simulation Politics and Bargaining - How to deal with interests and compromises? deals exactly with this question. The scenario takes place in an imaginary country in southern Europe which is rather small and has a multi-ethnic population without greater conflicts. The question referring to the use of the square in the city centre asks all participants to address political interests seriously, to respect each other and to negotiate a compromise. This task is not easy as not everybody is able to enforce its own position.