“Giving Europe a home”. A simulation on European Cultural Policy. 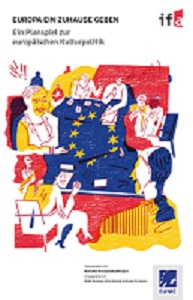 The European Union appears to be in crisis. Instead of spreading solidarity and public spirit, self-interest and the preservation of vested rights dominate the discourse among the member countries. Never before has the EU project looked less attractive for both internal and external audience. As a consequence of this, the European Commission has to take a big step. A new Pan-European concept must be created. The Intern of the Portuguese Commissioner for Culture has created an astonishingly reasonable proposal. To strengthen the cultural policy, the Croatian President of the Commission has made a motion to establish the "European Cultural Institutions". A heated discussion arose right after the idea was introduced to the Council of the EU. Is the smart idea of a young EU novice going to sink into oblivion? Will the initiative go through the Brussels committees and become a new European law? This is the scenario of the simulation game "Give Europe a Home".

The European Union, its processes and institutions are complex and not easy to follow. This simulation game introduces participants to the way in which this machinery is operated, using the young European policy field as an example. The players are assigned various roles from Commission President and EU Commissioners to Foreign Ministers and members of the Council of the EU. They get to know the legislative processes of the EU (ordinary legislative procedure) and try to find their feet, taking into account both national and European interests. If everything goes well, they will give the EU a new, exciting vision!