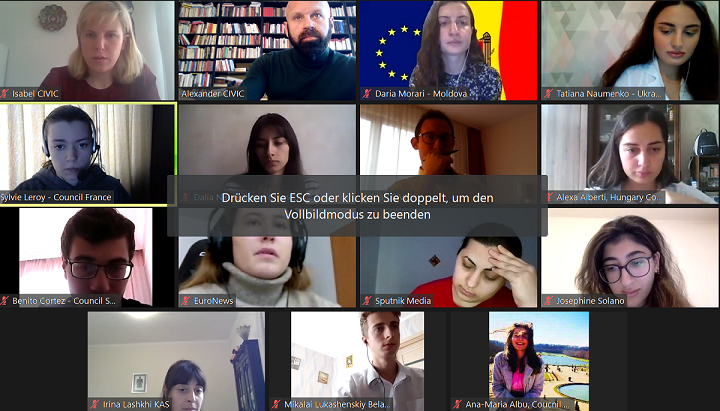 Which agreements are going to be made between the European Union and the eastern to be-associative countries? This exciting question was present in the minds of the participants throughout the simulation game „Shaping Neighbourhood – Negotiating EU Association Agreement“ from the 26th to 28th of September 2020.

Connected through the Zoom conference room it was possible to spend three days with an even transatlantic group of young students and professionals from Armenia, Azerbaijan, Georgia, Ukraine and the USA. We did not miss lively discussions and negotiations as well as convincing statements and conclusions. In the interactive digital simulation game, all participants played either a role of a delegate of the to be-associaitve country or a role of an EU decision maker. In total, the participants repeated frequently that they learned a lot about the European Union, their values and its decision making process, but were also thankful for such an well organized and informative event. However, the simulation game would not have been even remotely as pleasant and productive as it was, without the great group that we had! The event was conducted by a German-Austrian team of the Civic Institute for International Education on behalf of the Konrad Adenauer Foundation’s South Caucasus office in Tbilisi, Georgia.